Our recent Snowmaggedon has got me thinking about people’s tempers and patience.  What I saw and what I heard were two different things.  Scenario: Pre-storm. Lots of grumblings about what Mother Nature was going to dump on us or how it was inconvenient to plans and fear of the unknown set in (fueled by the media hype).  Scenario: The day of and the day after.  Neighbors helping neighbors, people out and about in the neighborhood on foot, digging out the elderly, the injured and sick.  Those with plows coming to others rescues.  Those with 4WD driving workers to their jobs.  Communication and connection.  Scenario: Post-storm 2 days.  The grumbling begins again as the aches and pains of shoveling emerge, as the kids have an extra day off and a 2-hour delay on top of that.  Flashback two day: Connection, communication, community = Love.

Emotions are good to have but when suppressed or hidden can have catastrophic effects on our body and our mind.  My weekly inspiration from Ms. Mindbody highlights the need to express oneself and feel.  Enjoy.  To receive her weekly newsletter, subscribe to http://www.msmindbody.com

Sit comfortably either in Sukhasana (Easy Seat) or on your heels. Take a deep inhalation through the nose. Then simultaneously open your mouth wide and stretch your tongue out, curling its tip down toward the chin, open your eyes wide, contract the muscles on the front of your throat, and exhale the breath slowly out through your mouth with a distinct “ha” sound. The breath should pass over the back of the throat.
Some texts instruct us to set our gaze (drishti) at the spot between the eyebrows. This is called “mid-brow gazing” (bhru-madhya-drishti; bhru = the brow; madhya = middle).Other texts direct the eyes to the tip of the nose (nasa-agra-drishti; nasa = nose; agra = foremost point or part, i.e., tip).
You can roar two or three times. Then change the cross of the legs and repeat for the same number of times.
Benefits: Useful for people with bad breath, relieves stress and can be used when you need to ease a tense situation, relieves tension in the chest and face, move stagnation in sinuses.
(Yoga Journal)

Benefits: opens the hips and groin facilitating blood and energy flow to the urinary tract and reproductive organs. Opens the chest and abdomen benefiting breathing problems.

Props: bolster, 4 blocks (or firm cushions, pillows or rolled-up blankets), 4 blankets and one extra blanket for warmth, strap and eye pillow
Place a block lengthwise under one end of a bolster to prop it up on an incline, add another block under bolster for stability. We used the wall in this week’s class placing the bolster at a higher elevation. Place a double-fold blanket on floor next to low end of bolster and a long rolled blanket on top next to bolster (for sacral support). Sit with your back to the short, low end of the bolster. Place two blocks where your knees will rest (can top with a soft blanket or use other props as necessary for propping knees)  Bring your legs into Bound Angle Pose with the soles of your feet together. Wrap a blanket around your feet to create a feeling of containment.  Lie back on the bolster. Place supports under your arms so that they are not dangling and there is no feeling of stretch in the chest. Stay in the pose for 10 to 15 minutes 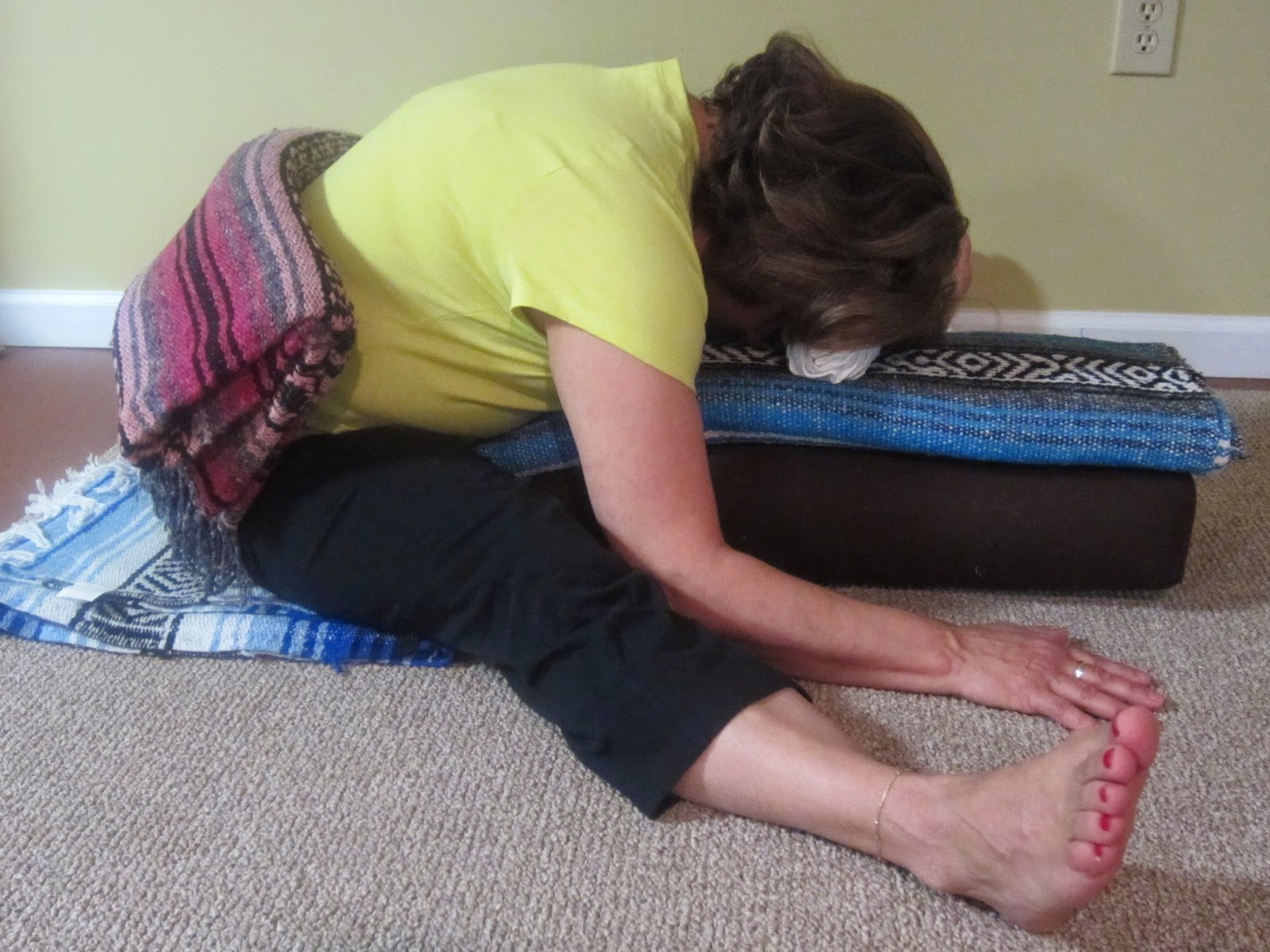 Props: bolster, 2-4 blankets, may use a chair, if difficult to reach bolster.
Benefits: calming, gently stretches lower back, nice transition from the days activities.  A good pose to do if you need a few minutes break from your daily work, easy to do and easily accessible.  Good for headaches.  Breathing is easier since muscles of the respiratory system are relaxed.

Place blanket single-fold on bolster draping down. Legs can stretch through chair or straddle or cross-legged.  Arms placed folded on chair in front of you. Rest forehead on arms. Tilt chin slightly toward your chest.  Close eyes. For comfort or lower back issues, sit on blanket, add rolled up blankets under knees if legs in straddle, or blocks/blankets under knees if cross legged. May add a blanket at sacrum for grounding.